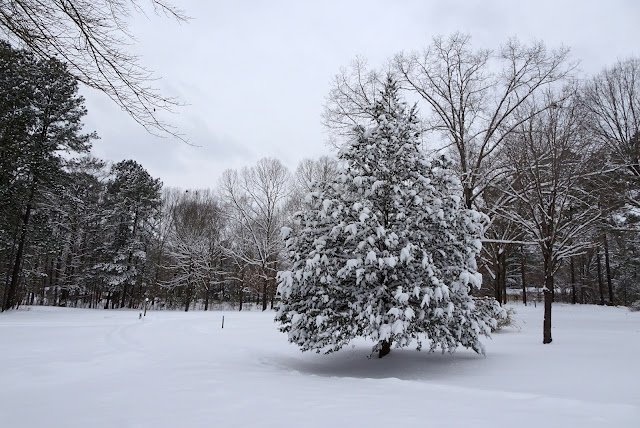 I entitled my last post "Let It Snow!" It did! It snowed and snowed and snowed. It snowed several inches on Monday and then snowed all day Wednesday and into the night. We received a total of thirteen inches over one inch of ice that was already on the ground. This was a history making storm, breaking several weather records. It was also the third longest streak of below freezing temperatures since 1879 when Arkansas starting recording its weather: 209 consecutive hours below freezing. 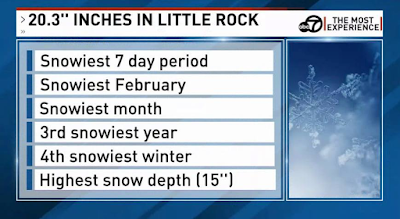 That's enough facts. I didn't post today to recite facts, but to let you see the beautiful snow! I'm still recovering from the second lithotripsy, so I wasn't able to play outside very much. Just a few short trips close to the house. The day it snowed all day, I found the perfect spot to watch it as I rested. Our guest room has a large window and a warm bed! I watched the snow accumulate on the bare tree limbs. I love bare trees. I love to see those limbs stretching in all directions. They are especially fascinating when covered with snow. 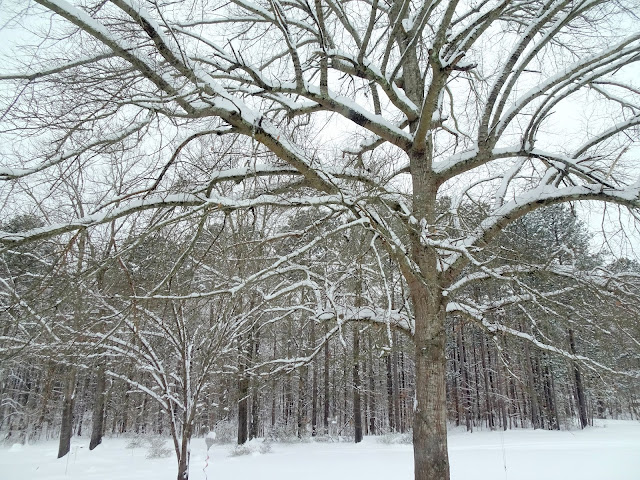 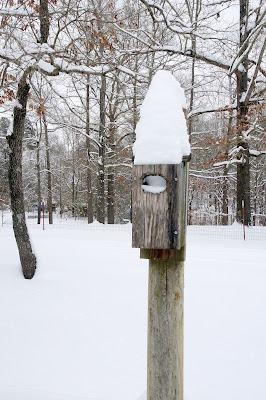 At the end of the full day of snowfall we finally saw the sun and melting began. I took a lot of pictures from inside looking out. 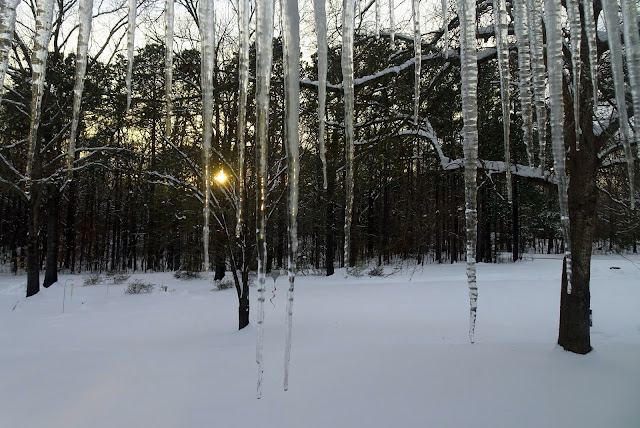 We live in the city limits of the biggest city in the state. But, we live rurally so there's no snow plows coming to dig us out. Jerry worked hard at keeping our driveway cleared in case we needed out. Thankfully we didn't. He'd come up missing and I'd open the door and hear him plowing the neighbor's drives and roadways. I know he was being nice, but actually, it was just a good excuse to play in the snow! 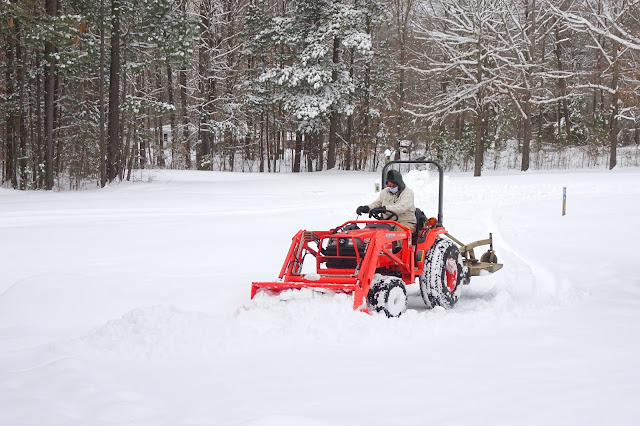 The sun came out on Friday making it feel much warmer than it was. I think everyone was ready for a little sunshine! I know I was! 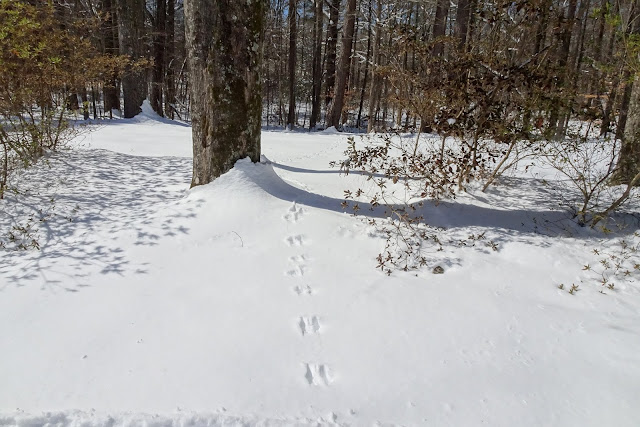 I knew my  Lenten Rose bush had buds on it before it snowed, but I didn't even think to cover and protect it. I was relieved when the snow melted enough for me to see that the buds weren't hurt at all! These are the hardiest little shrubs I've ever seen. The bud looks like it's ready to open, but it will take several weeks to fully open. Then the blooms will last for three to four months. Amazing! 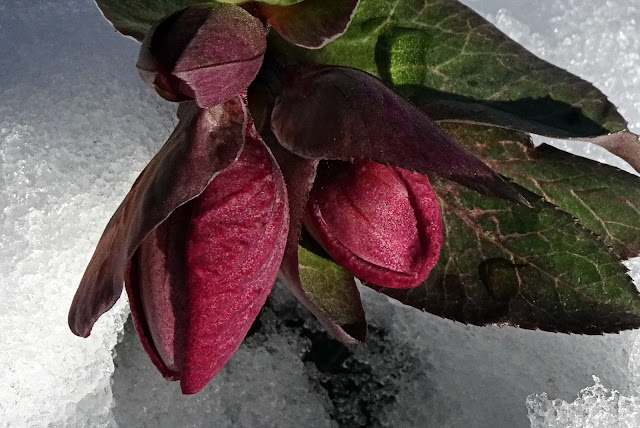 We had some mighty long icicles hanging from our roof; the longest seven foot! You don't want to be under these things when they fall. This is another picture taken from inside. The little building in the background is my potting shed that Jerry and his friend built for me. 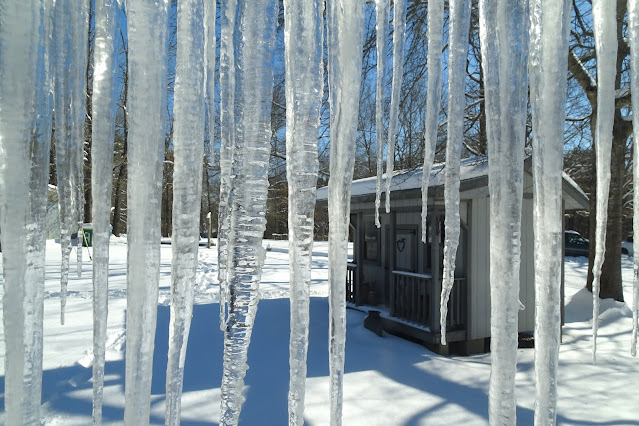 As the snowed melted off the roof it dripped on the plants in the flower bed. It refroze  encasing the leaves in ice. 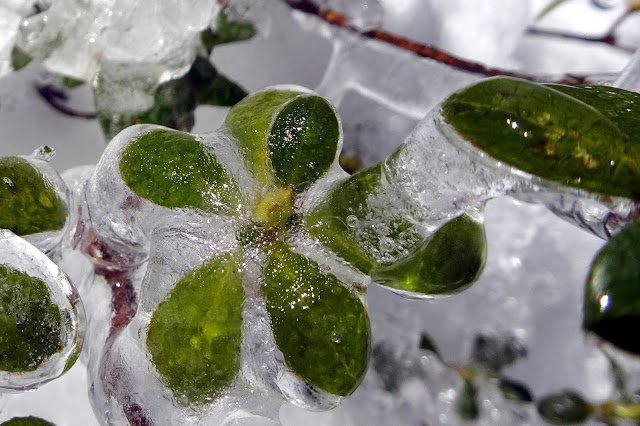 A good day of melting revealed a dandelion flower that had been covered in snow. I can't imaging how this flower survived and still looked beautiful! 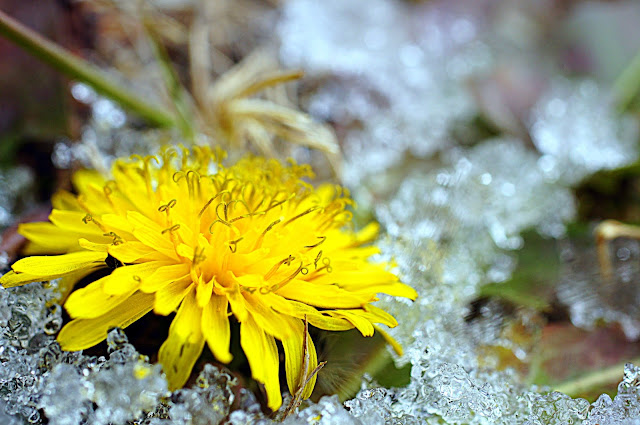 And lastly, one must have a snowman! Still recovering from my procedure kept me from making one. I could only be outside for a few minutes at a time, since walking in 14" of snow  and ice was just too hard. Nature made the snowman for me! The snowman is actually a large vintage milk can that snow accumulated on. All I had to do was add the hat, scarf, and eyes! Such fun!! 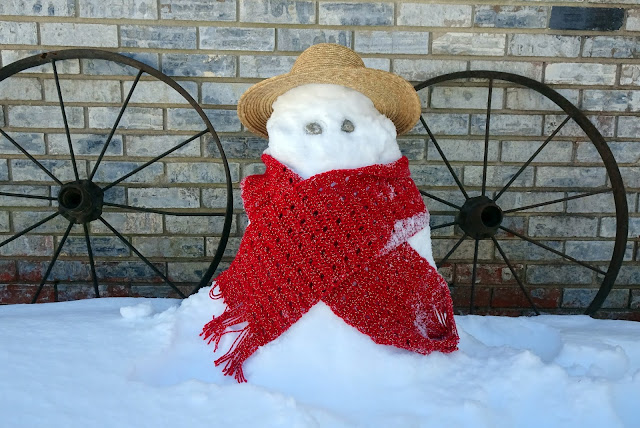 I know a good portion of the United States has seen artic cold and various precipitation this past week. Many have had to deal with frozen water pipes, power outages, traffic nightmares, and food shortages. I am so grateful I can stay home and enjoy the snow. I'm also so happy for all the children that were able to enjoy this history making snow! They will never forget it! I hope wherever you are, you are safe and warm!
Posted by Cathy H. at 8:56 AM

Thanks so much for stopping by!!