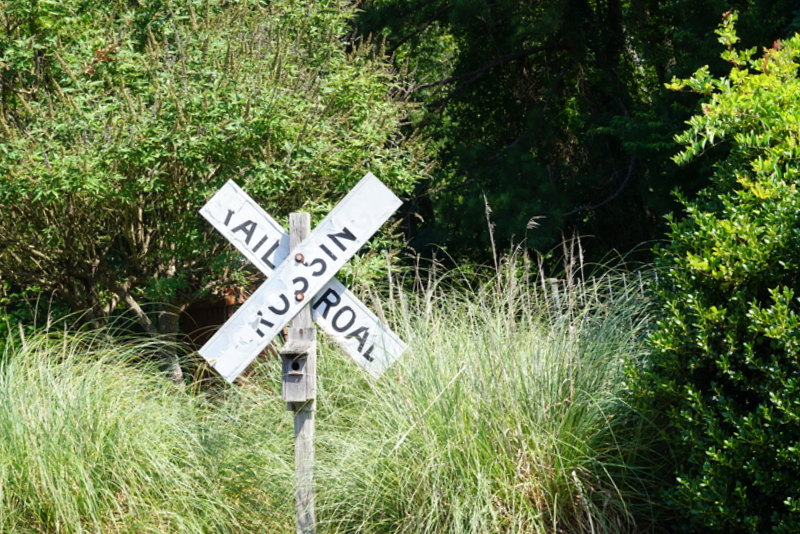 If you belong to my family you'd better love trains. With 2,667 miles of active rail lines in Arkansas you're bound to run into train tracks often. We don't moan when those crossing gates come down and the traffic has to stop; we get excited, we wave at the engineer, and count the cars as they pass. When our children still lived at home our vacations sometimes centered around riding excursion trains or train museums. In fact, we've ridden every excursion train in Arkansas with them. My son and his wife took a train trip on their honeymoon. My daughter and her husband rode a train in Alaska. The grandsons, they love everything about trains! This post is for them. It's full of train photos and train information.

Gramps and I took a little road trip yesterday to southwestern Arkansas. Well, not a little road trip, 375 miles round trip. I'm still working on my project to photograph all 84 courthouses in the state. On our trip I added six more courthouses leaving me with 13 to go!! During our trip we saw several train stations and even a couple of trains.

Here's a little history of why we see trains when we're looking for courthouses. Early towns in Arkansas were built as a result of the construction of railways. Towns were built along the railways making it easier to get goods and easier to travel. As counties were formed many of the cities chosen for county seats were near waterways or railways for easy travel to conduct county business. Therefore, the courthouses are many times near railroads. After I take pictures of the courthouse we look for railroads. 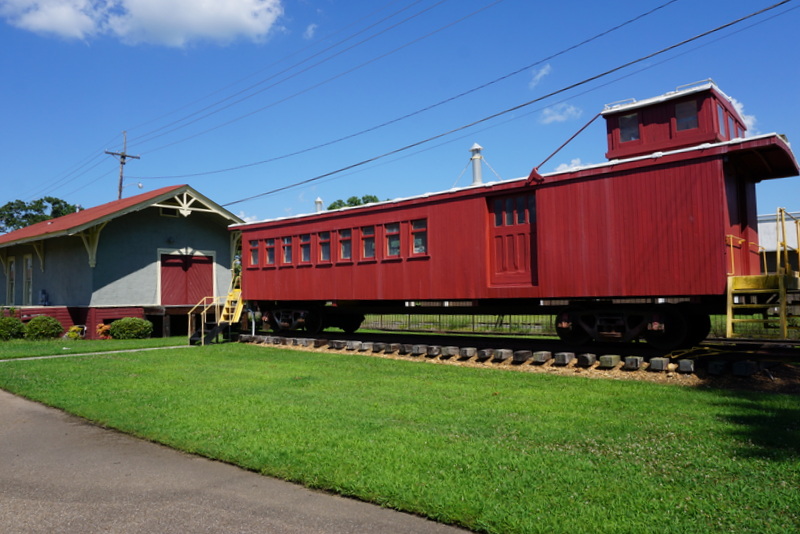 I love to photograph historic train stations, but cabooses are always one of my favorite things to find. This long caboose sits at the Memphis, Paris and Gulf Railroad Station in Ashdown. The station was build in 1908 by a railroad that connected Memphis, Tennessee and Paris, Texas. It offered passenger service until 1947 and freight service until 1993. 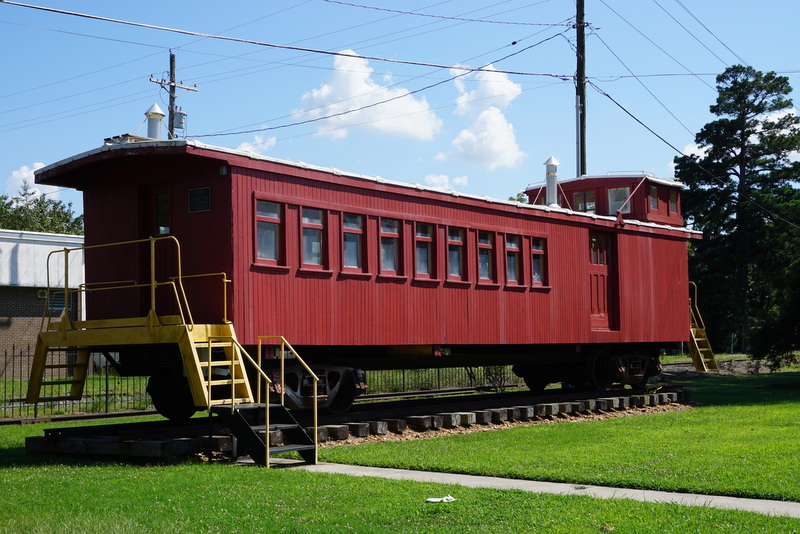 This Cotton Belt "Drover" Caboose No. 2304 was used to haul passengers, freight, and goods on branch lines to larger cites. It ran in Arkansas up to the 1960's. I had quite surprise when I looked in the small window on the caboose door. It's a Christmas caboose! 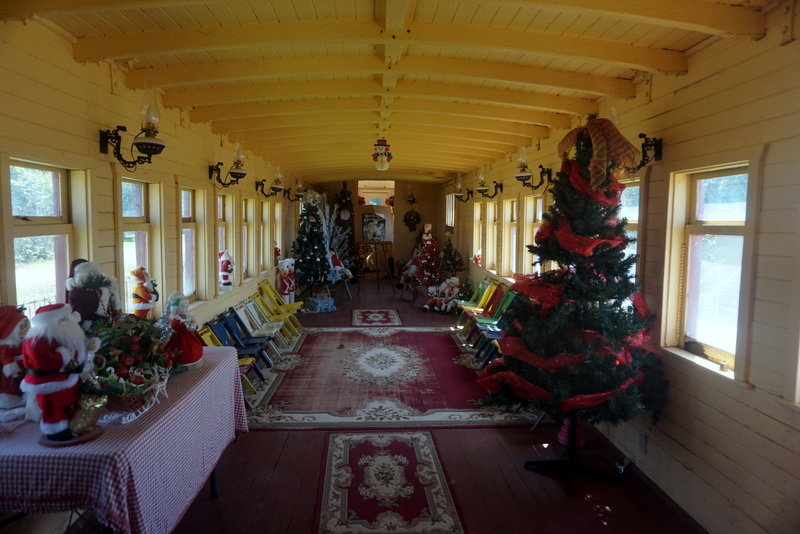 A few of those 375 miles we traveled were in Texas. The city of Texarkana is in both states. This historic train station built in 1928 straddles the state line. There is an entrance and exit into both states. On the Arkansas end of the station Amtrak's Texas Eagle still stops for passengers. When it's stopped the west end of the train is in Texas and the east end of the train is in Arkansas. The rest of the station is now abandoned, but I've read that it's privately owned and will be renovated. 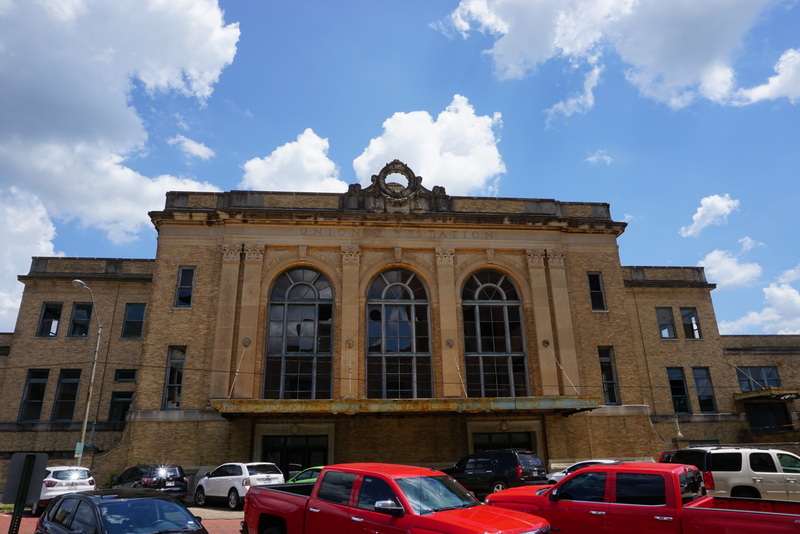 Texarkana is proud of it's railroad history. There are several murals painted on sides of the old downtown buildings. 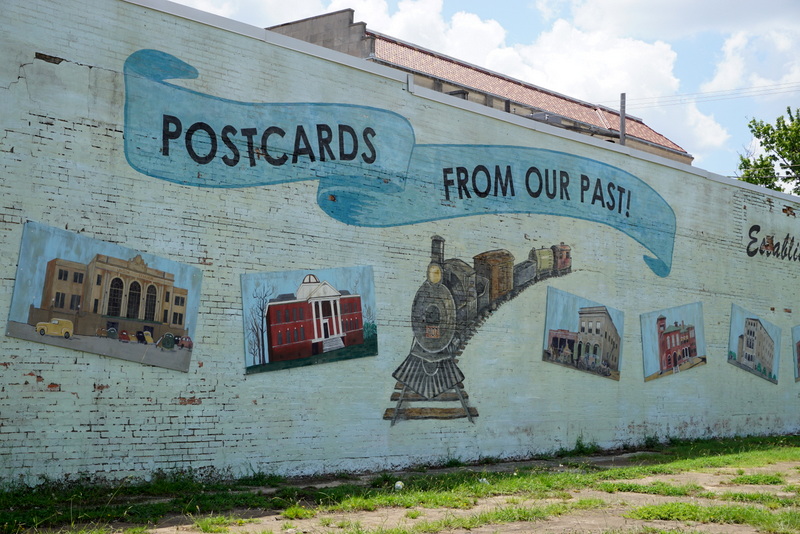 I wasn't able to get this train all in one pictures. There were two bushes right in the way. So, here's the engine . . . 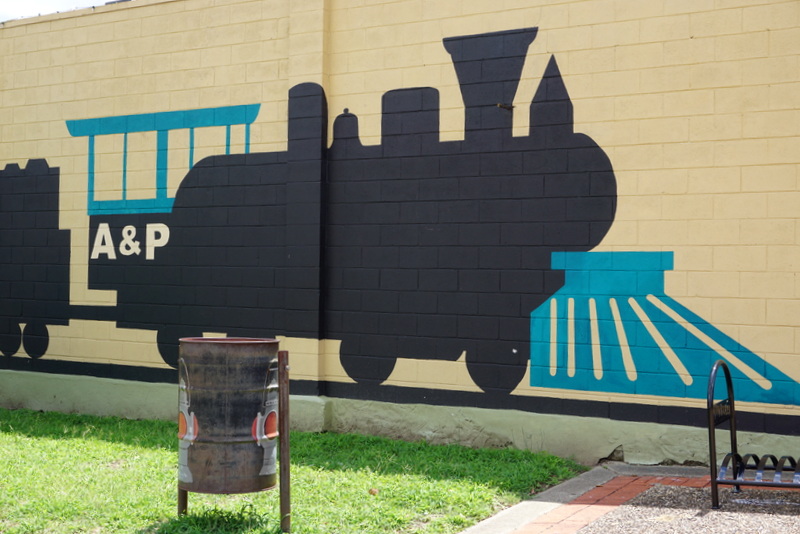 and here's the rest of it. 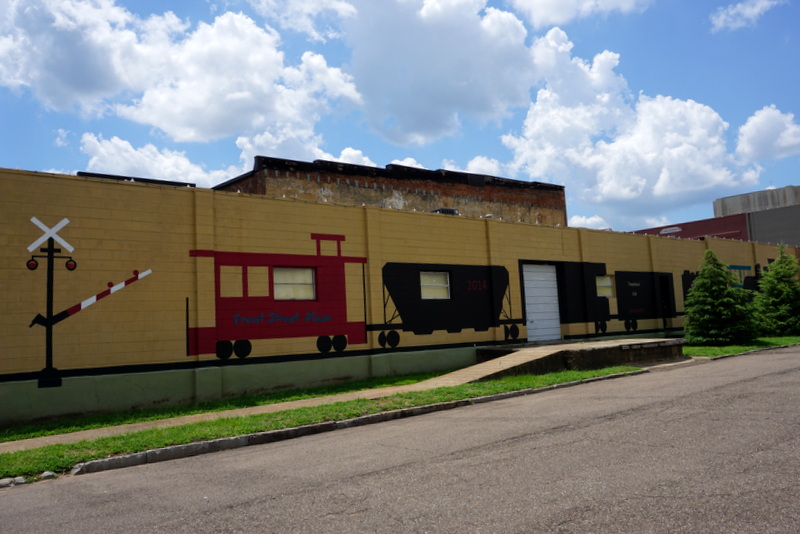 They also have the best painted trash cans I've ever seen. 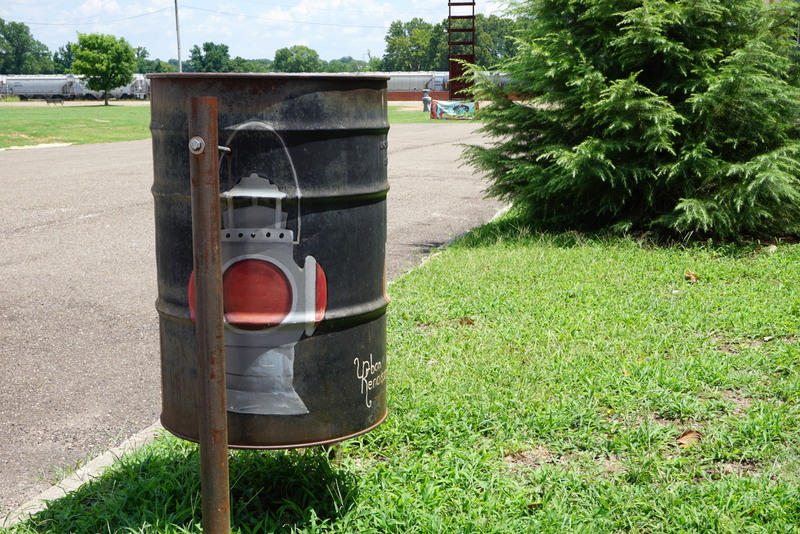 I almost missed this train track sculpture. I was taking pictures of the mural and trash can then turned to walk back to the car and there it was, behind my back! 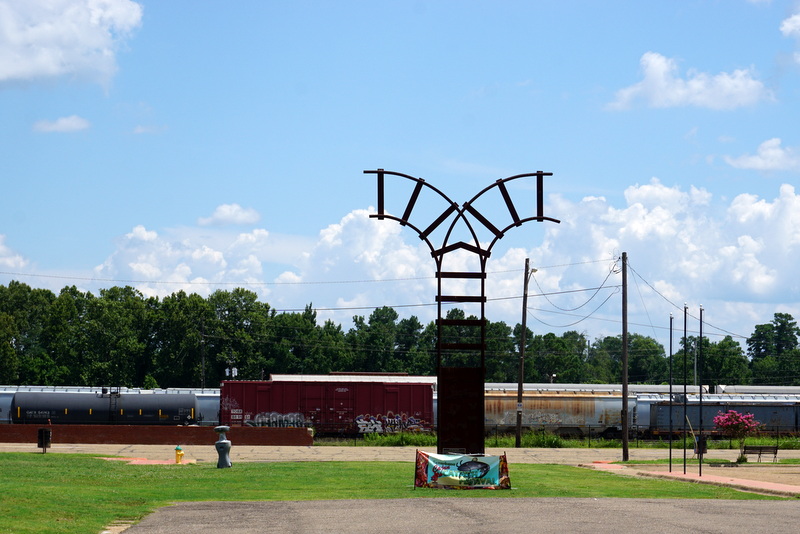 In the very small town of Lewisville, we were turning around in a parking lot and spotted this sculpture on the side of a building. 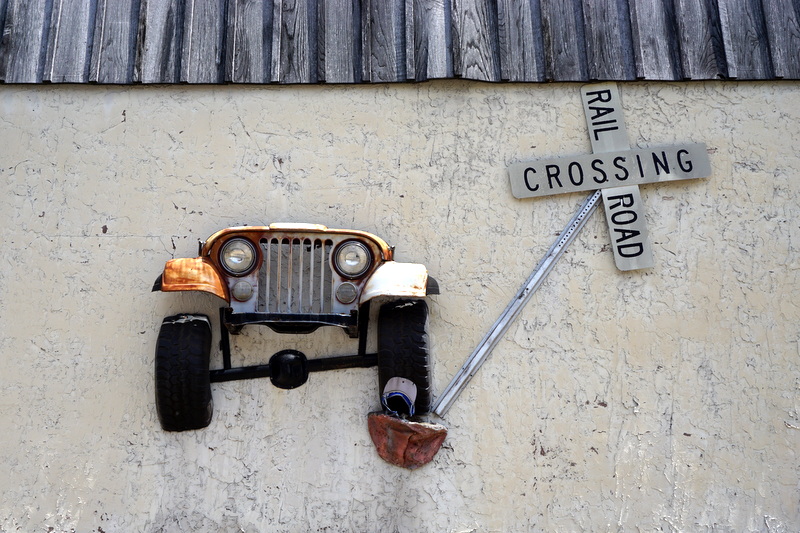 Like I said we're always on the look out for trains so I can take pictures for my grandsons. 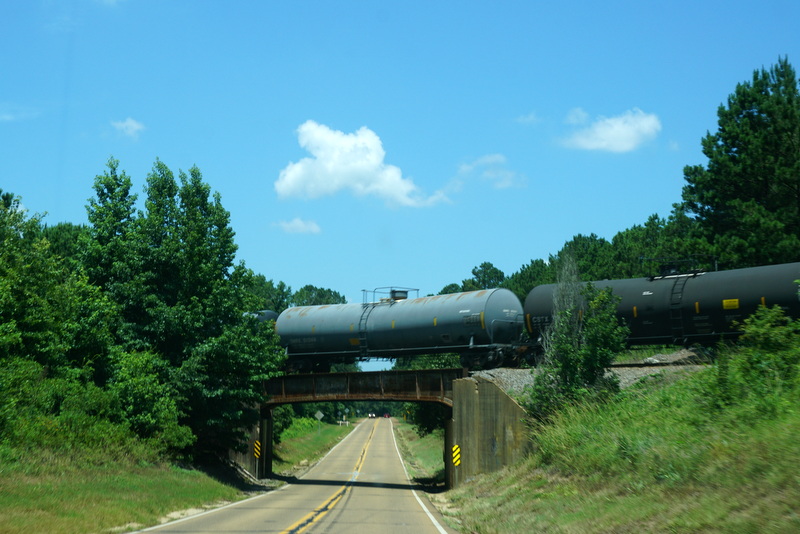 Note to my grandsons:
Jake, Drew, Josh, Aaron, and Isaac I hope you enjoyed the train photos. You were on my mind a lot yesterday. I kept saying to Gramps "the boys would love to see this!" 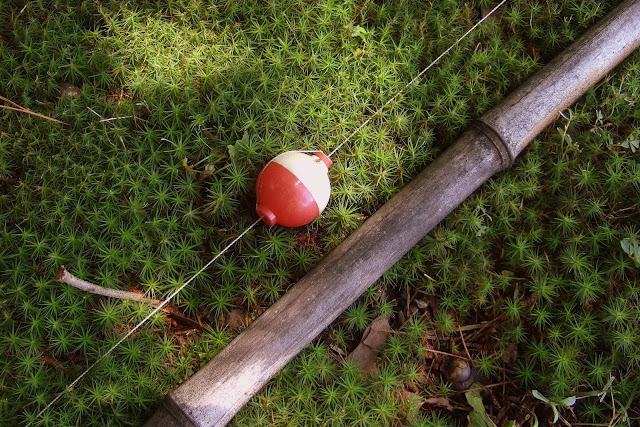 It was on the ground under the shade of a tree, close to a small lake where geese played and swans glided across the water. It was waiting; waiting to be picked up and a wiggly worm put on its hook. It was waiting for its line to be cast into the lake where it’s red and white cork would bobble in the water until some unsuspecting fish snatched at the worm and the cork would quickly sink under water.

The highlight of many of my childhood summers included a week spent with my Uncle Harry and Aunt June. They had no children of their own, but each summer they welcomed not only me, but several cousins as well. Most summers there were at least six of us. I look back and wonder how they every survived the week!

Among the traditions of the week was fishing in the pond across the road from their house. It was in the middle of a cow pasture, but my uncle always mowed us a path to the pond. The boys would go looking for worms and then we’d all get our poles and hike down the path. I remember . . .


Uncle Harry patiently baiting our hooks,
casting my line,
watching the cork float in the water,
the smell of hot grasses,
cows mooing,
the heat of the sun,
the chorus of crickets and frogs,
straw hats,
itchy legs from bugs and chiggers,
the excitement when my cork began to bobble,
Uncle Harry with his camera around his neck taking our picture when we caught a fish,
and
the smell of frying fish for supper.

But, most of all I remember the joy of being with my favorite aunt and uncle and the love they gave us all. I miss them both so very much. I’m thankful for these childhood summer memories that came flooding back when I saw a pole, a line, and a cork under a shade tree.


Join us each month as we choose a photo and tell a story.