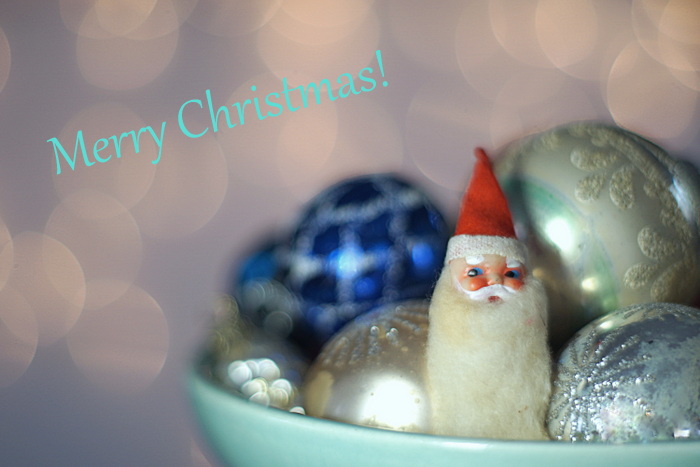 I want to squeeze in one last post about Christmas before I take down the old calendar and put up the new! If I had to list my favorite Christmas related things, these would be my top five:
ornaments
Christmas trees
Santa
snowmen
nativities

My last post feature the stitched ornaments on my tree, but I love all kinds of ornaments! I especially love Shiny Brite ornaments. Several years ago I began seeing them at flea markets and fell in love with them. I display the ones I bought in a beautiful bowl that belonged to my grandmother. Max Eckardt created Shiny Brite ornaments in 1937. He worked with Corning Glass, a company that made light bulbs, to adapt their process to make clear glass ornaments. They were then shipped to Eckardt factories to be decorated by hand. 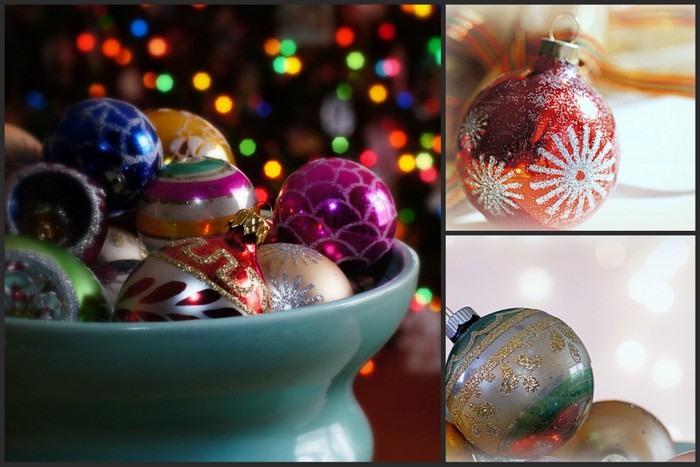 I'm not the only one in the family that loved Shiny Brite ornaments. My grandmother had them on her tree. Her ornaments would have dated in the 1940's to 1950's. After her death, my mother displayed those ornaments in her house. Now that my mother has gone, I am honored to display some of those treasured ornaments in my home. 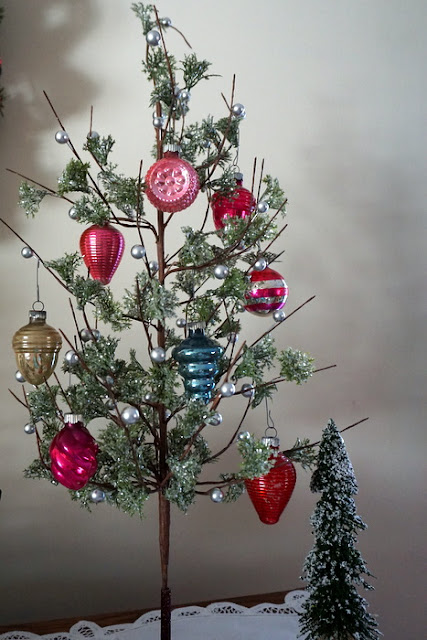 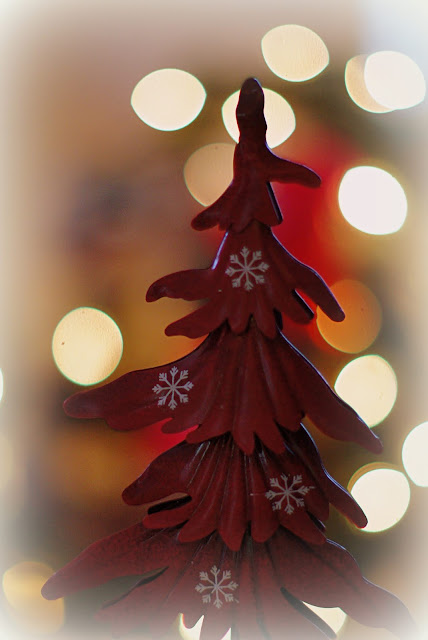 The only thing I know that could make a Christmas tree better, is for my grandsons to be gathered in front of it! 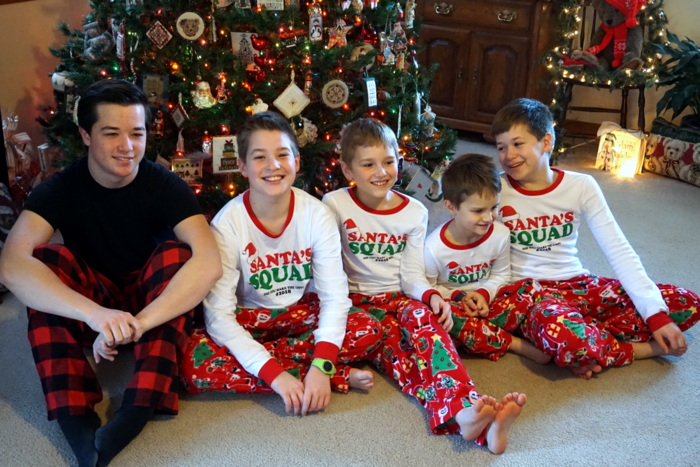 It's always an experience to get the Christmas pajama photo each year! 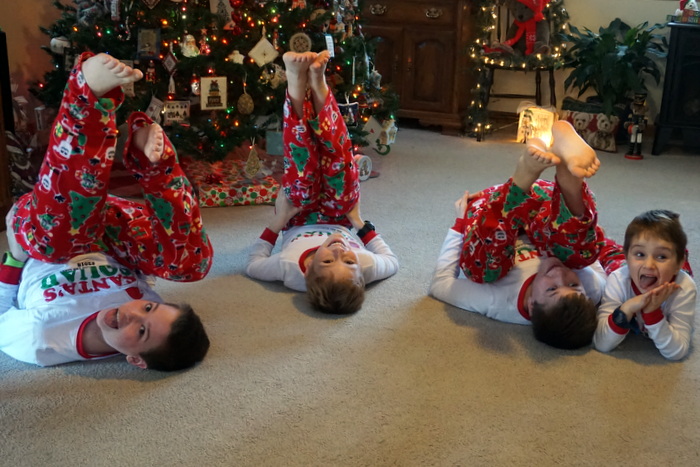 Of course Christmas trees must have some Santas on it!
This star-shaped Santa is one of my favorites. 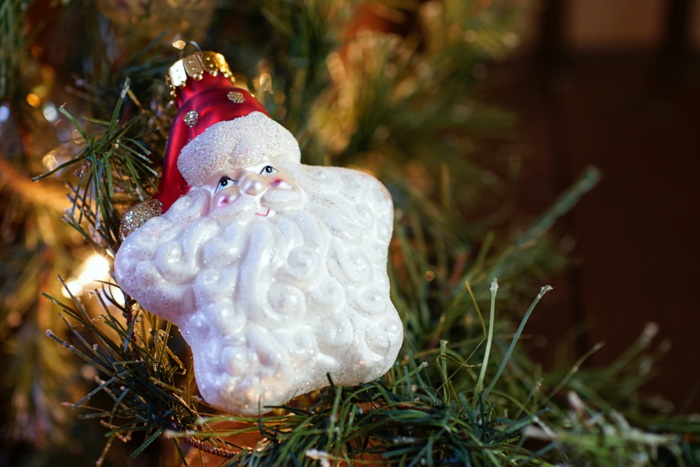 Although I have pleanty of Santas, I really like snowmen better. Sorry Santa! I have a small four foot tree that is loaded with only snowmen ornaments. 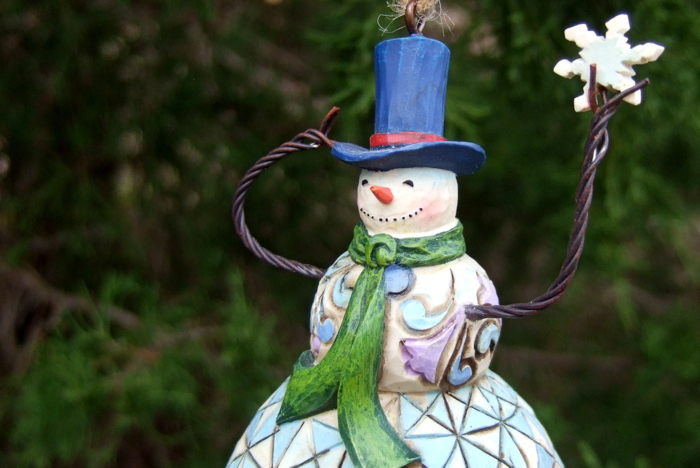 I saved the very best for last. I can't imagine having Christmas without focusing on the birth of the Christ Child.

"For unto you is born this day
in the city of David
a Saviour, which is Christ the Lord."
~ Luke 2:11 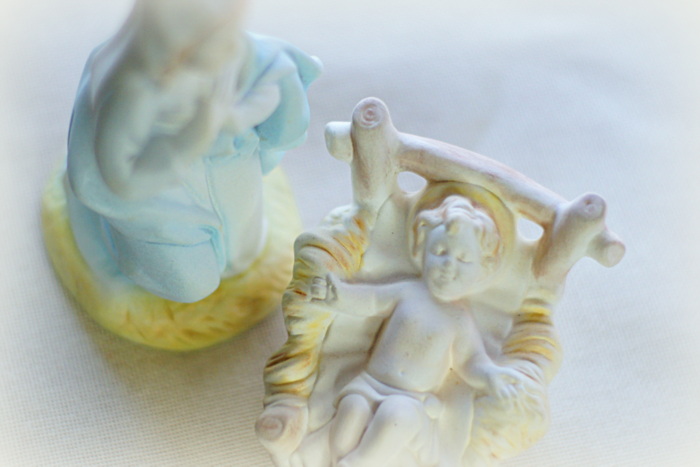 I've enjoyed one last look at Christmas, but now it's time for me to begin putting it all away!

Wishing you a Happy New Year!

A Year In The Making 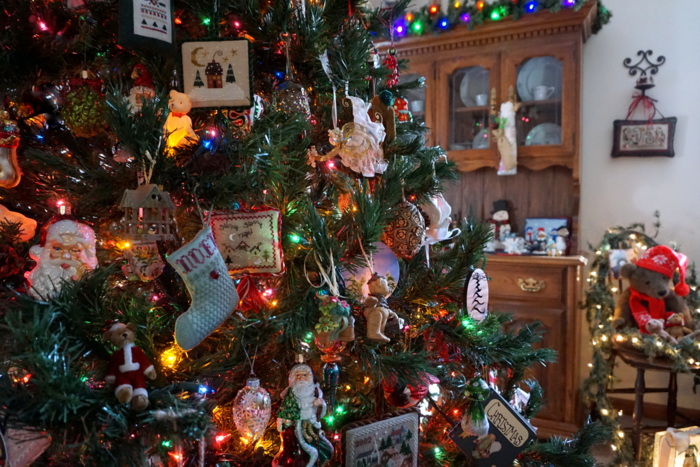 Last December right about this time I set a goal for 2018. My goal was to cross stitch one Christmas ornament each month. I'm here to say . . . I DID IT!! Actually I exceeded that goal. I stitched 16 ornaments this year; nine for my tree and seven as gifts. 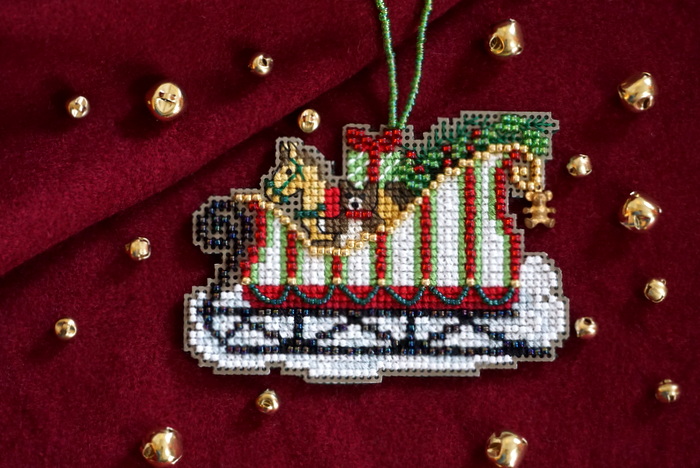 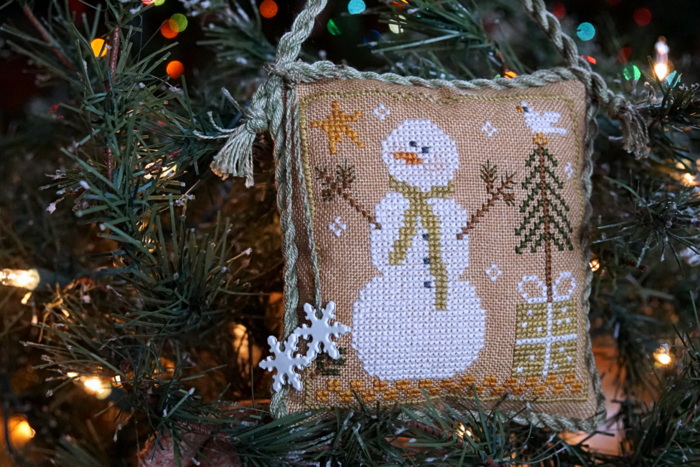 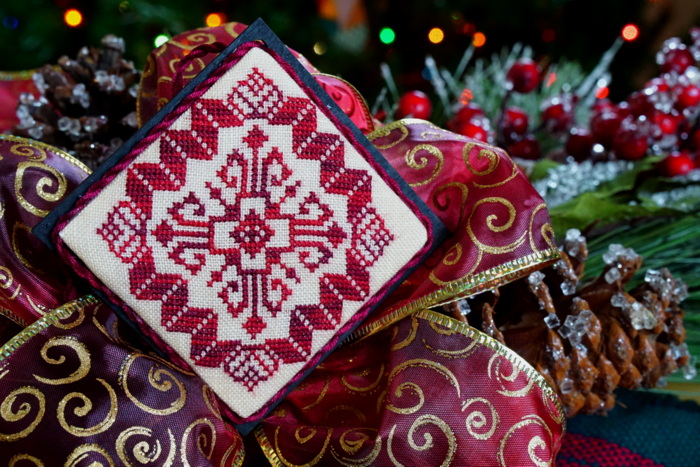 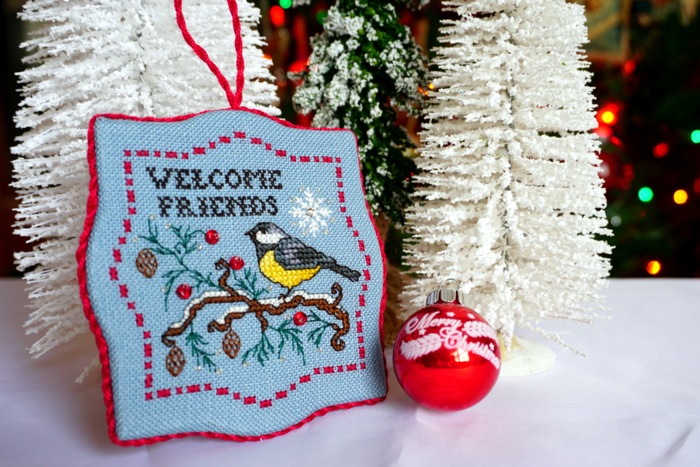 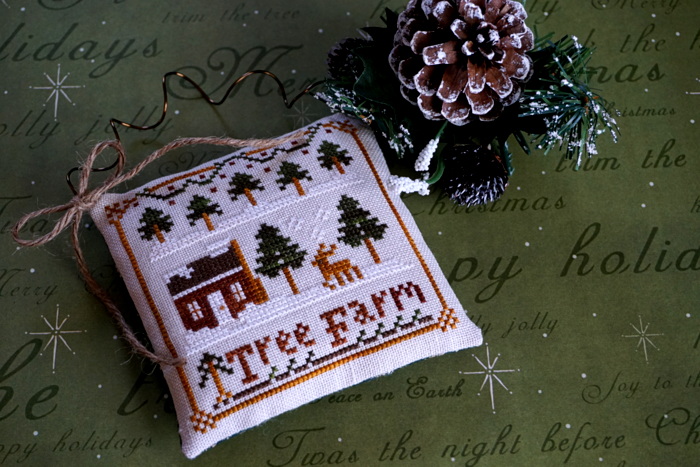 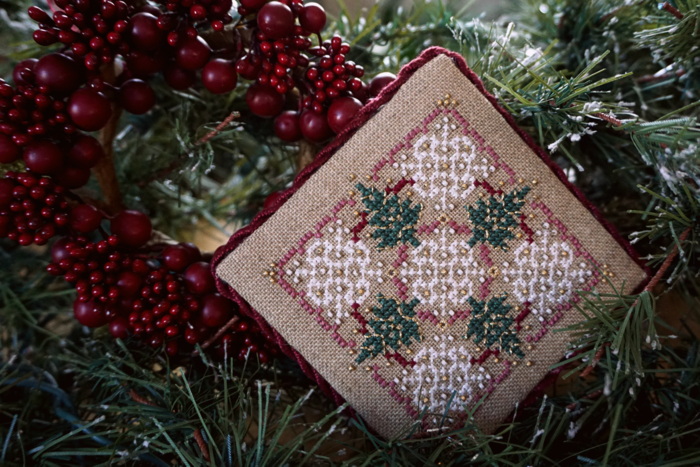 In July I began stitching ornaments for my family. Each year I stitch one for each of my five grandsons. The oldest grandson now has a collection of sixteen ornaments that I've stitched. I also stitch one for my daughter’s and son’s family trees. My choice this year for the boys was Freezing Season which you can see below. 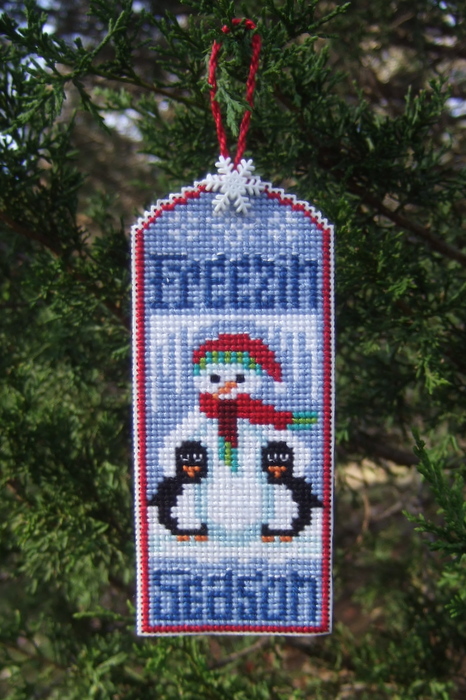 
In JULY I stitched the second Freezing Season. 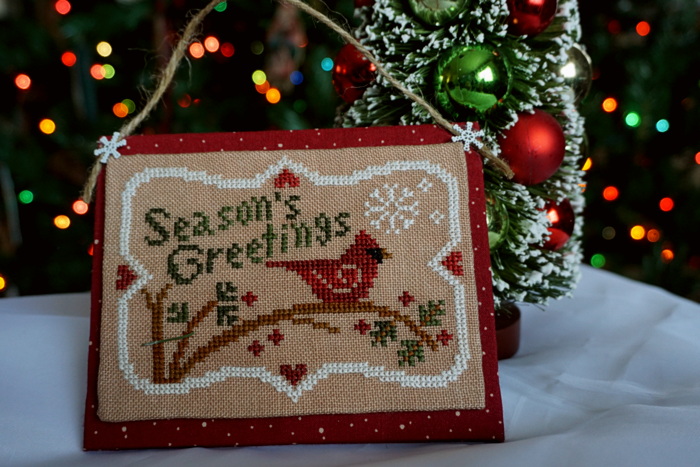 In SEPTEMBER I stitched the fourth Freezing Season. 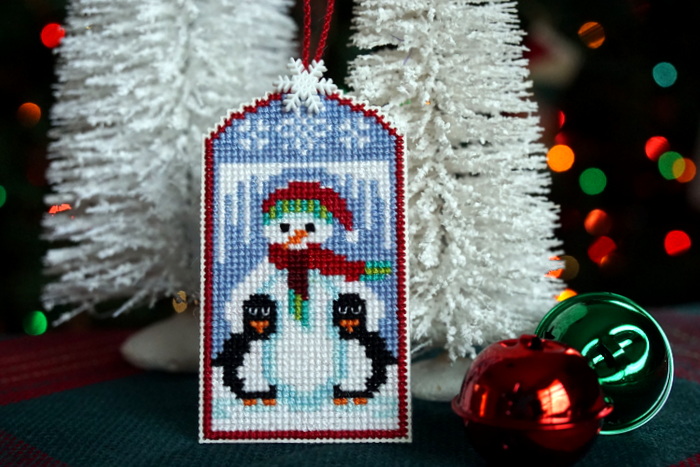 In October I stitched the fifth Freezing Season. I also stitched a modified Freezing Season for me. While stitching the five ornaments for my grandson I made a huge mistake on one of them. I usually stitch at night while Jerry watches television. There must have been a good show on that night because when  I picked up my stitching the next night, I realized I had completely left off the section with the word Freezing in it! SO, I started another one for the boys and then finished this one for me without the words! 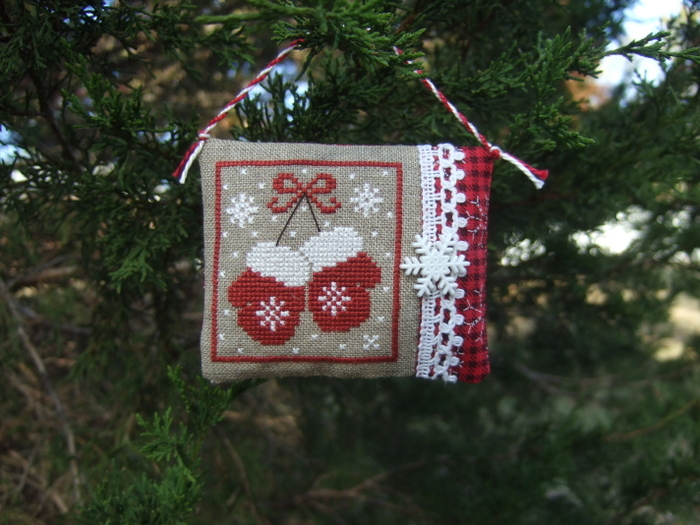 I stitched two Warm Hands Warm Heart, one each for for my daughter's and son's family trees. 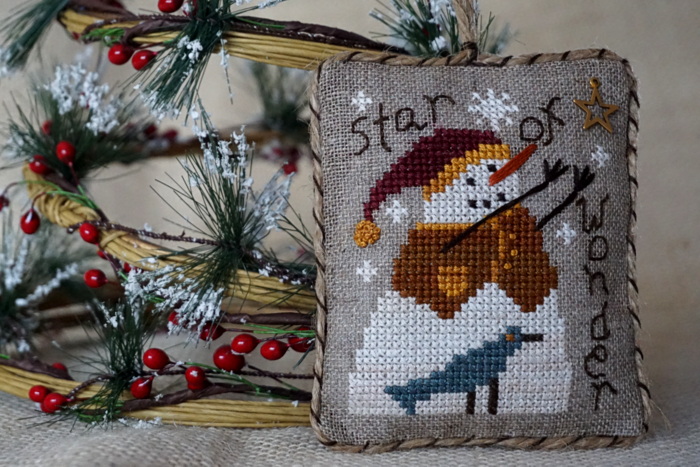 Cross stitching is something that was moved to the back burner several years ago. I have enjoyed picking up my needle and stitching again this year. Pushing needle through thread is rhythmic and quite relaxing. I have several ornament charts already lined out for next year, but I'm not sure I'll push for one each month because I have run across several other charts in my stash that I'd like to stitch.

The inspiration behind my year of stitching ornaments came from Carol who has been stitching monthly ornaments for nine years. Not only is she a wonderful stitcher, but she has wonderful ideas for finishing her ornaments. If you would like to see her 2018 Parade of Ornaments please visit her blog.

Thank you for stopping by
and
Merry Christmas! 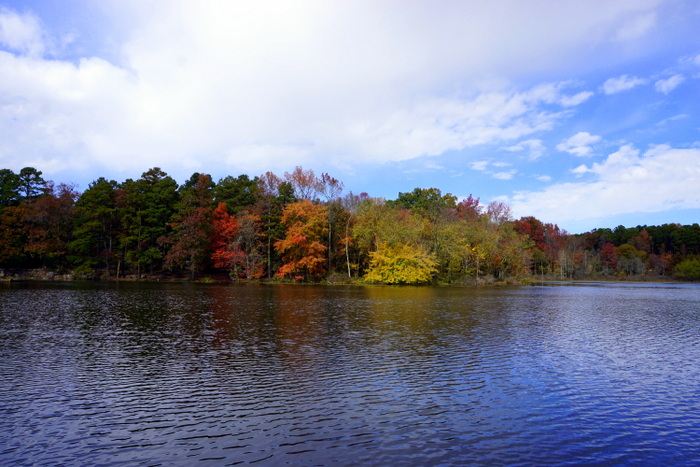 Even though we've had a few cold days and even some snow, according to the calender it's still Autumn. Before winter is here to stay I wanted to share a few pictures of Autumn in Arkansas. 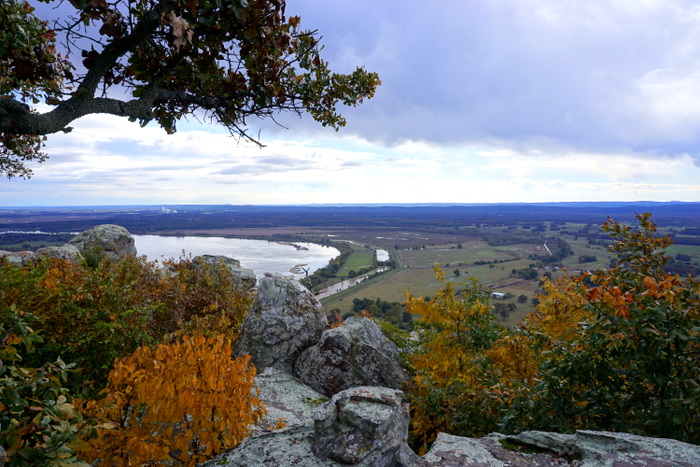 My sister, sister-in-law, and I took a day trip to Petit Jean State Park. Petit Jean is Arkansas' first state park. The land was set aside in 1923 before the Arkansas State Park System was even started! 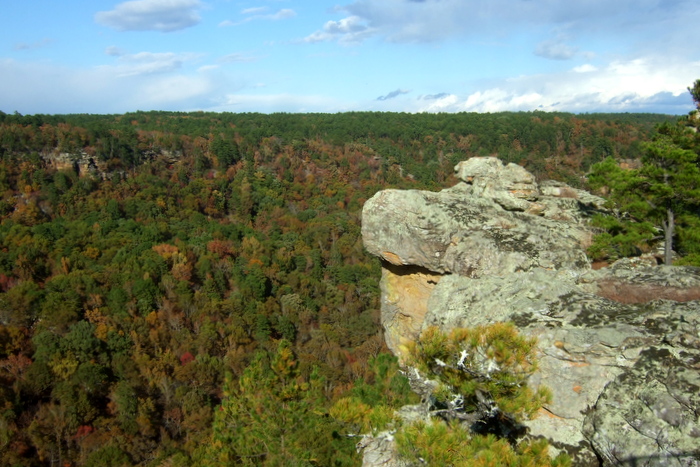 There's a legend associated with the park. A young French nobleman named Chavet asked the King of France for permission to explore the New World. The King agreed to his request. Chavet was engaged to a young girl who asked that they be married so she could accompany him on the journey. Chavet refused her request. The young girl however didn't accept his denial. She disguised herself as a boy and applied to the captain of Chavet's ship to serve as a cabin boy, calling herself Jean. The sailor's called her Petit Jean. I can't imagine during all the time she was on board that her fiance didn't realize who she was. Either she had an amazing disguise or he never looked at her very closely!! 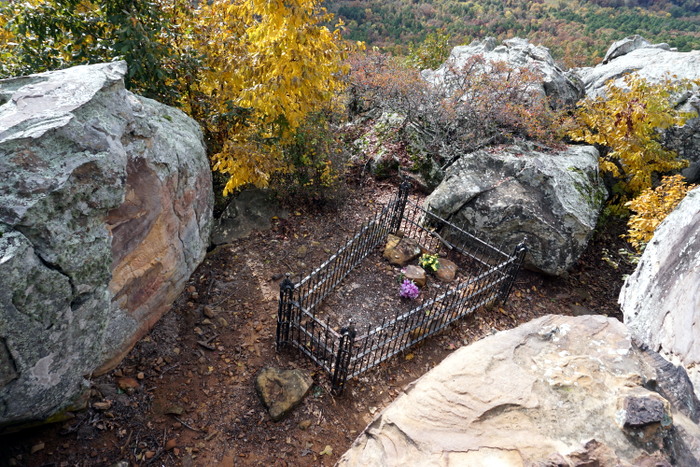 As they traveled down the Arkansas River they came upon a beautiful mountain where they stayed for awhile. The night they were scheduled to leave Petit Jean became very ill. Of course, during her illness her identity was discovered. She asked to be carried back to the mountain top to spend her last days and to be buried there. Legend has it that Petit Jean hovers over the mountain, giving it an air of strange enchantment. 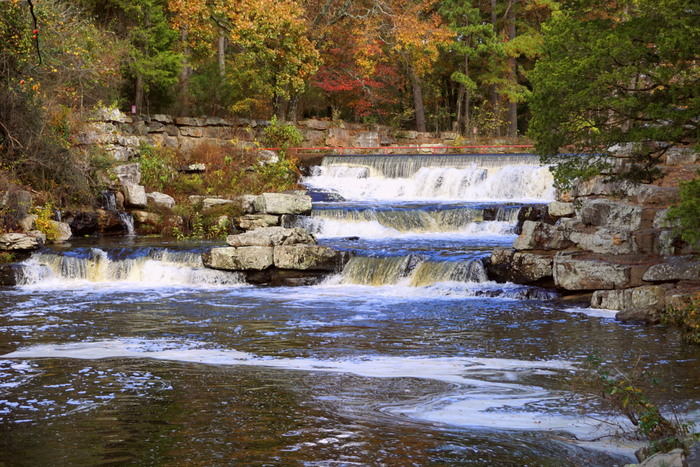 Petit Jean is a beautiful park with hiking trails, lakes, and waterfalls. As we ate our lunch we listened to the sound of rushing water. We walked beside the lake until we found the source. 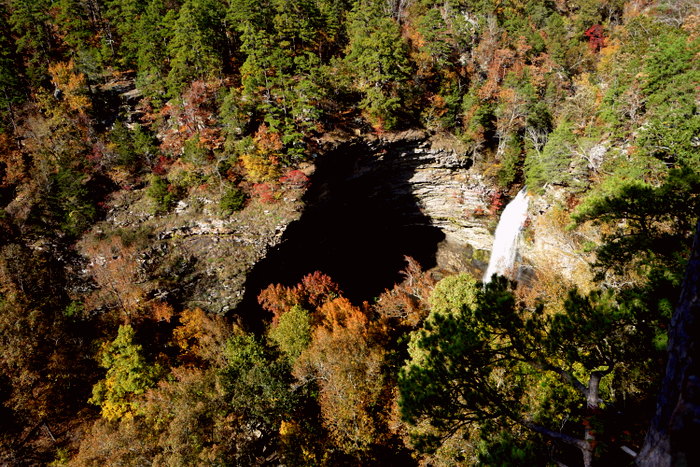 One of the treasures of Petit Jean is a 94-foot waterfall. There are trails that lead to the bottom of the falls, but it's a pretty tough hike so we choose to see it from the top where you only have to walk down a nice boardwalk! 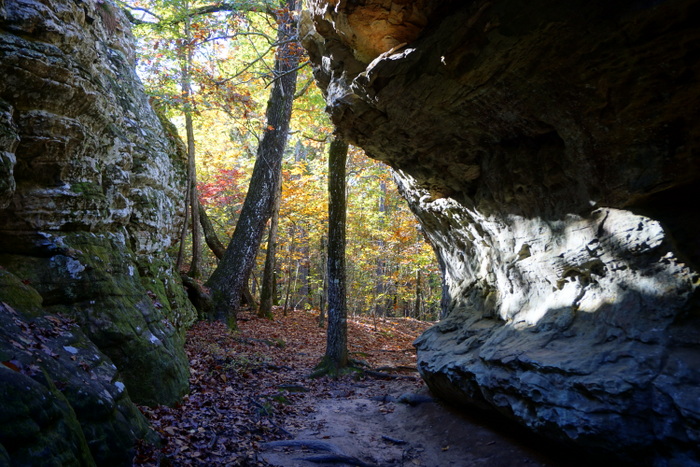 The rock formations are massive. The area above is called Bear Cave. Although it's not really a cave it was named by a mountain resident who shot a bear in one of these small bluff shelters in the 1920's. 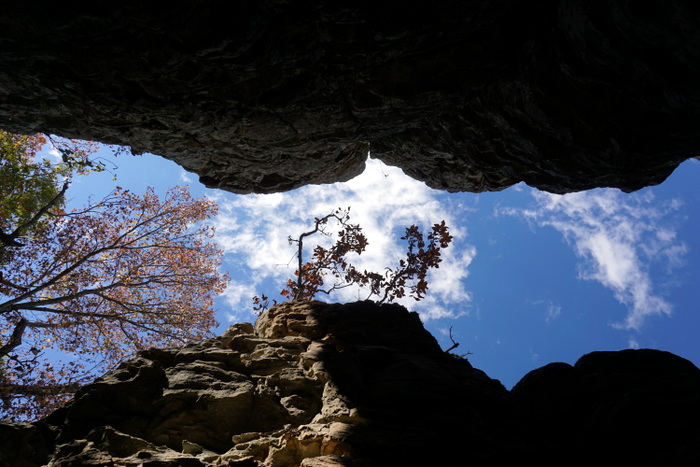 Stopping between the rocks and looking up made me feel very small and insignificant. 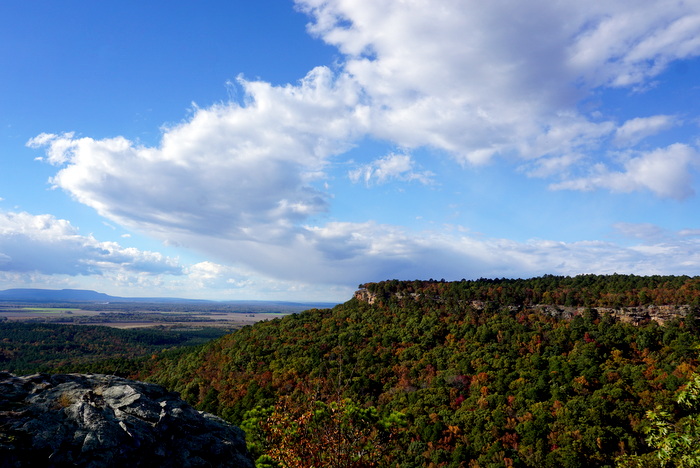 This was one of the prettiest autumn's we have had in a while. The moisture and temperatures seem to be just right to create gorgeous color. Looking across the Arkansas River Valley left me breathless and once again in awe of this world we've been given to enjoy!